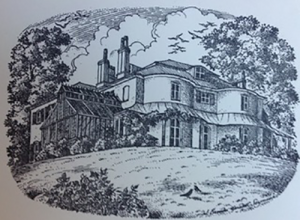 Woodlands is almost 200 years old and has passed through many owners since it was built in 1826, two of these owners played a significant part in the re-construction of Teignmouth in the 19th Century and the results of their activities are still enjoyed by us today.

The first owner was Mr Hollands who was a banker who built the house and its grounds.  He was one of the owners of the Teignmouth Bank, established in the previous century, which was a prestigious local institution that even issued its own bank notes. The house was originally called Barn Park, rather than Woodlands, which is the name now given to the road, and the estate included land reaching down to what became the station and included a coach house which can still be seen on Lower Brimley Road and a separate gardeners residence, cowhouse, peggery, fowl house, green houses, some of which still stand although they are now in other peoples’ gardens, and a gazebo which also survives.  At that time there were few houses here, the views out of the windows would have been largely woodlands but the nearest house, now called Barnsley House, can just be spotted if you look eastwards out of the bedroom windows.  Mr Hollands was a very rich man and helped pay for the drainage of the land that is now known as the Triangle, he was thanked by having a road named after him, Hollands Road which stretches between Teignmouth Station and the Triangle. 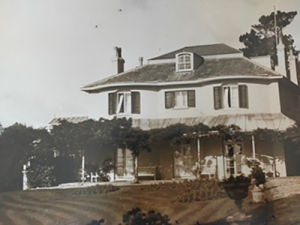 Local legend has it that Mr Hollands buried his “treasure” in the grounds of Woodlands when there was great anxiety over the threat of invasion by Napoleon’s forces, but no such treasure has ever been found. This is explained by the fact that there was no Napoleon on the French throne during the period that Mr Holland owned the house.

The next owners were Mr and Mrs Egerton, they show in the census as early as 1830, so clearly, despite his riches, Mr Holland didn’t hold on to the house for very long. Neither did the Egertons’; Mr Egerton had died by 1842 and the house was again for sale in 1846 when it was bought by George Hennet. Hennet was an extraordinary man, in an official document he is described as “railway contractor, shipowner, engineer, timber merchant, limeburner, coal merchant, dealer and chapman”. He owned 12 ships and was a contractor for 13 railway companies including one in France, and he was awarded the contract for building the South Devon Railway to Brunel’s designs and maintaining it afterwards. Teignmouth Station opened on 30th May 1846 and was the original headquarters of the South Devon Railway. George Hennett was also instrumental in obtaining the independence of Teignmouth as a port, developing the Quay and building the bonded warehouse still there today. Quite the entrepreneur! 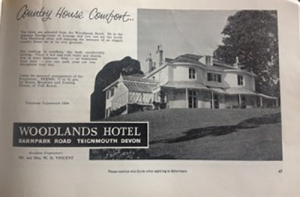 Hennet established his home in Teignmouth in 1847 and rebuilt Alberta Mansion on Myrtle Hill, he then lived at Woodlands making some changes to the house including adding the front porch and so moving the entrance of the house to where it remains today. He also owned Fonthill, a very large and beautiful property in Shaldon and an estate at Watcombe, near Torquay.

However, things eventually went wrong for George Hennet, perhaps he overstretched himself! and he was sadly declared bankrupt in 1855 leading to sale of the house, and he died in 1857. Some of the land that belonged to the house was sold at this point as the houses in the bottom half of what we now know as Barnpark Road started to appear around then.

The next owner to show on the census was George Shaw in 1857, followed by James Pitt-Pitts in 1882 and William Bartlett Harris in 1893 who moved in with his wife Caroline, originally from Rochdale. Harris, whose descendants lived in the house until the 1950’s, lived here with his son and daughter and a cook, parlourmaid and housemaid, the servants presumably living on the top floor where the rooms are much smaller. Born and bred in Teignmouth, William Harris was solicitor, who had been living in The Strand in Teignmouth 10 years previously. William passed the house on to his son Thomas, also a solicitor, who passed it on to his children Elizabeth, born 1875 and Sydney, born 1877 who never married. We know that during the war Woodlands stopped being a private house and took in evacuees from London as we had quite a few ex-evacuees returning to have a look around. They all have happy memories of the house and Teignmouth itself. When Elizabeth eventually died in 1950 more land was sold off and Barnpark Road became the street it is now.

It was then that the house was turned into a hotel by Mr and Mrs Vincent, they managed to get 15 bedrooms in here, but made do with only 2 bathrooms!

Premium bed and breakfast accommodation in Teignmouth, Devon. We look forward to having you visit us!